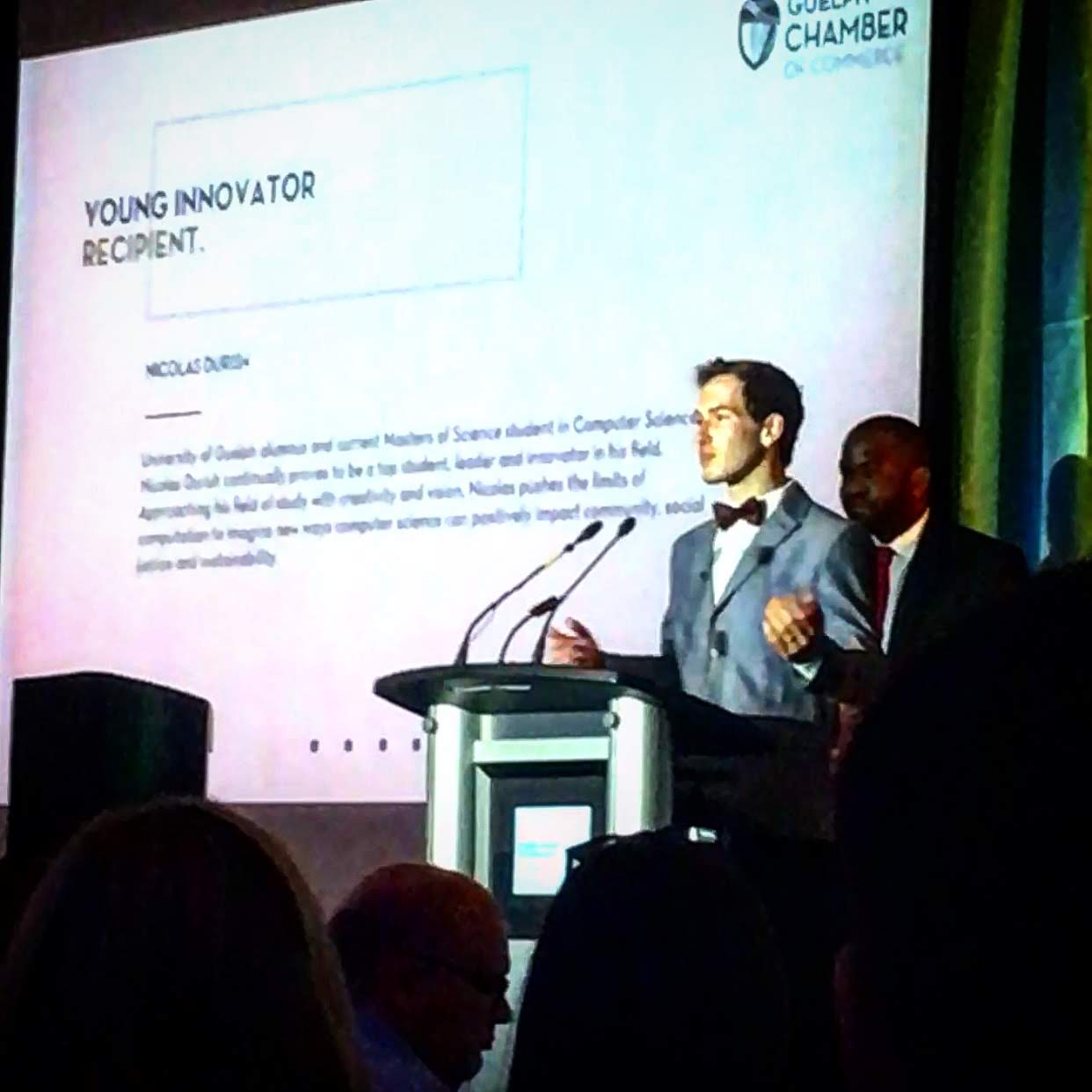 Just over a month ago I wrote a short blog post announcing that Nic Durish, MSc Computer Science student, was shortlisted for the Guelph Chamber of Commerce Awards of Excellence. In particular, Nic was selected as one of three finalists for the Young Innovator Award.

Last night, I had the privilege of watching as Mary Wells, Dean of the College of Engineering & Physical Sciences, announced that Nic had won the award. And I couldn’t be happier or prouder.

As an undergraduate, Nic won the inaugural Feeding 9 Billion Challenge with a novel innovation (Sustain-A-Bin) developed to provide food producers and consumers with an accurate representation of the food they waste. Less than a year later, Nic led a new team of students to win the Net Zero Hackathon with ElecTrickle, an app to help homeowners budget their energy consumption. Both projects received further accolades, including 1st place in the Pitch for Progress Competition, top 3 in the national ScotiaBank EcoLiving Award Competition, and support from Guelph’s Elevator Project, as well as coverage in several newspapers and the online magazine AgInnovation Ontario.

Nic’s innovative spirit has continued into his graduate studies. In August 2017, he travelled to the remote Inuit village of Rigolet, Nunatsiavut, Labrador as one of the lead developers on the community-led eNuk health and environment monitoring program. As part of his research, Nic has begun the development of an innovative approach to encourage participation with the app that builds on Inuit culture and tradition, while also identifying and quantify the digital divide that exists across Northern Canada.

Despite his workload, research travel schedule, and the fact that Nic only began his graduate studies in September of 2017, he has already co-authored 5 conference posters, 4 conference presentations (including one invited talk), 2 workshop presentations, and a blog post about his experiences in Rigolet. He won third place in the Student 2 Minute Challenge at this year’s CPHAZ Symposium. He has also been accepted to speak at the upcoming International Congress on Circumpolar Health in Copenhagen and has submitted 1 poster and 3 talks for other conferences held later this year. He has helped develop a new website for the eNuk program, and worked with our interdisciplinary team to extend eNuk’s functionality. Recently, Nic was the lead author on an invited paper for the Collaborative Approaches to Wellness and Health Equity in the Circumpolar North special edition of The International Journal of Circumpolar Health.

Nic’s work has not gone unnoticed. In addition to the accomplishments mentioned above, he has been awarded a Graduate Scholarship worth $18,000 per year to support his master’s degree, and he has received travel awards to continue his innovative work with the community of Rigolet, Nunatsiavut. More recently, Nic has been awarded a Polar Knowledge Canada Northern Science Training Program (NSTP) grant to support his research investigating the digital divide in the Circumpolar North. He was also nominated for the SoCS Teaching Assistant Award.

Nic’s commitment to social innovation is more than academic. Between completing his undergraduate degree and beginning his Master’s degree, he and his fiancé purchased a school bus and converted it into a sustainable tiny home, complete with solar panels and compostable toilet. After travelling the country in their tiny home, they became a major attraction to performing artists and attendees at last year’s Hillside Festival, and have amassed a significant Instagram following. In fact, they were asked to headline the Perth Tiny House & Green Home Festival. Amazingly, Nic and his fiancé have also somehow found time to plant over 1 million trees in Northern Ontario over 6 years.

The evening’s program summed up quite nicely why Nic received the Young Innovator Award:

University of Guelph alumnus and current Masters of Science student in Computer Science, Nicolas Durish continually proves to be a top student, leader and innovator in his field. Approaching his field of study with creativity and vision, Nicolas pushes the limits of computation to imagine new ways computer science can positively impact community, social justice and sustainability. Nicolas has participated in numerous projects that bridge the power of computation with various social challenges including energy conservation, waste reduction, health and environmental monitoring and truth and reconciliation to create solutions. Nicolas is a leader, innovator and problem solver who pushes the boundaries and embodies the University of Guelph’s commitment to improve life.

Congratulations Nic. I am so incredibly proud of you.

This site uses Akismet to reduce spam. Learn how your comment data is processed.

Some of the research and work presented here takes place in the ancestral and continued homelands of the original peoples of Labrador: the Inuit of Nunatsiavut, the Inuit of NunatuKavut, the Innu of Nitassinan, and their ancestors.  Some of our work also takes place on the ancestral lands of the Katzie, and Lummi people. Finally, we acknowledge that the University of Guelph resides in the ancestral and treaty lands of the Attawandaron people and the Mississaugas of the Credit, and we recognize and honour our Anishinaabe, Haudenosaunee, and Métis neighbours.

Some of the research featured on this website was undertaken thanks in part to funding from the Canada First Research Excellence Fund. 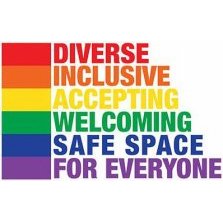 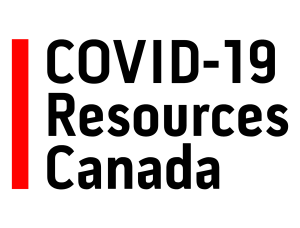 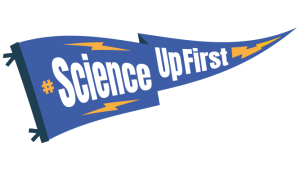 Fight the spread of COVID-19 related misinformation with #ScienceUpFirst. 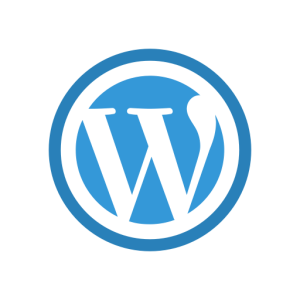 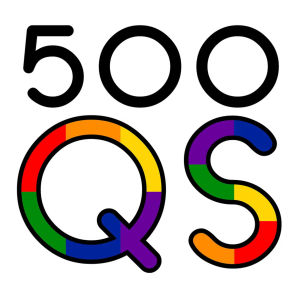 Listed on 500 Queer Scientists and Skype A Scientist. 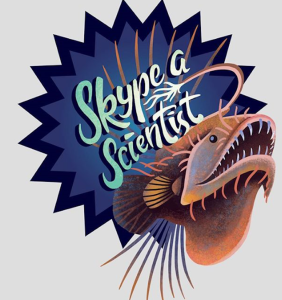 I had to say goodbye to Beans today - thanks to the coronavirus.
Beans is behind bars for a bit while he visits the vet for a checkup.
A little spring to brighten up the condo.
12 weeks of kitty shenanigans. #FrankAndBeans
Yum. This is my first brown sugar cake 🍰, but it won’t be my last.
Mmmm, coffee coffee cake.
Beans likes to snuggle up and purr aggressively next to me while I'm working (especially when I'm working from bed). #TimelineCleanser #CatsOfInstagram
Does anyone have any butter?
A moment of calm between zoomies. #catsofinstagram
Six weeks with these goofballs. #FrankAndBeans #CatsOfInstagram
Frankie, standing guard as the dishwasher does its job.
In honour of #PiDay, I've whipped up a blueberry, blackberry, and raspberry pie. YUM!
A punch of colour to remind me that spring is just around the corner.
Someone wants snacks.
Old Fashioned Gingerbread Cake and Focaccia 😃YUM.
Three weeks of kitty shenanigans.
They’re here.
Some lazy Sunday snuggles. #catsofinstagram
Rainy Tuesday mood.
The adventures of Frank & Beans continues. #catsofinstagram
%d bloggers like this: